It’s a favorite pastime in Illinois. The polls close, and within minutes, Republican leaders, pundits, and consultants are already pointing fingers at who they blame for our party’s failures. (Let’s be honest: they usually start well before Election Day.)

There’s no data yet. It takes weeks, sometimes months, to get the data needed to accurately evaluate what actually happened in the election. But that doesn’t matter. These people made up their minds long ago—data is irrelevant.

But…uh…that’s clearly not working out too well for the Republican Party in Illinois.

So we decided it was time to do things a little differently. Cor is funding and leading a significant effort to gather data and research exactly what happened in the 2022 election so the Republican Party can make fact-based decisions on a path forward that might actually lead to some victories. Because why are we doing this if we’re not interested in, you know, winning?

This is a gigantic effort that will take time, and we intended to release all our findings at once after the effort was complete. But Republican organizations and leaders are already meeting to plot out plans for the next 2 years—before any data exists on which to make those decisions (don’t get us started)—so we’re moving more quickly to start getting this information out. Plus, it’s 2022, people’s attention spans rival that of Dug from Up (Squirrel!), so breaking it up into more manageable pieces is probably best.

In this first of four parts, we’re releasing the results from an in-depth statewide exit poll we took of Illinois voters asking what drove their votes and what might change their votes in the future. We surveyed over 1,000 confirmed 2022 General Election voters from November 15th – 18th using a combination of live, texting, web, and automated methods. As you can see from the demographics achieved in our poll, the results nearly exactly match the 2022 election results. 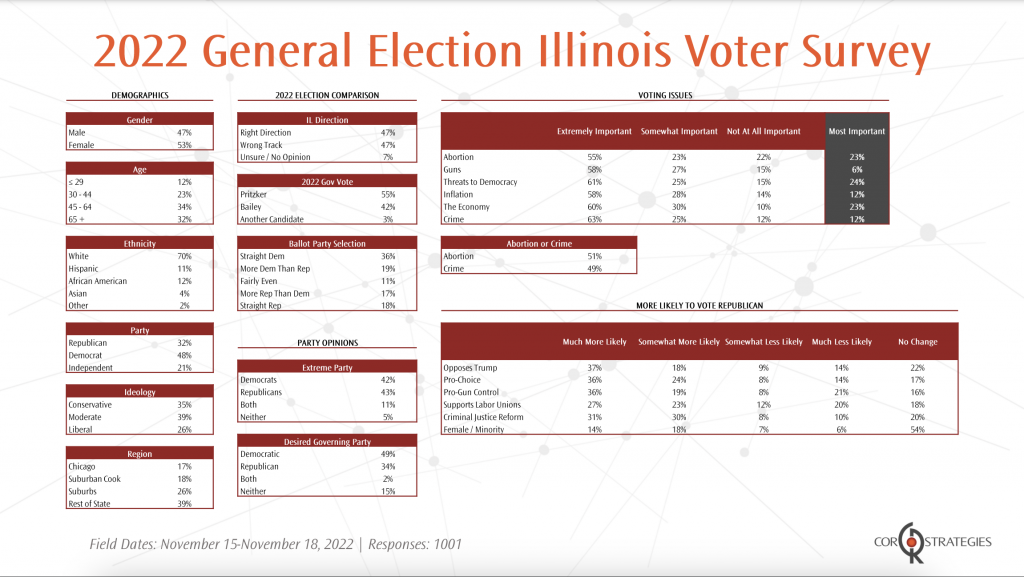 This Deep Blue State Is Neither Liberal nor Progressive

You’d think a state that votes as blue as Illinois would be quite liberal or progressive. But you’d be wrong.

Just 26% of voters in this last election identified as liberal, compared to 35% who identified as conservative. The big winner? “Moderate” at 39%.

You’re doubting these numbers. You’re not the only one—we did too. But we checked and re-checked the numbers. We even ran a follow up poll, changing the questions around, to verify. The data is accurate. And a bit mind-blowing.

This is a moderate state. A surprising 41% of Democrats identify as moderate, plus 61% of independents. 54% of Asians, 53% of African Americans, and 43% of Hispanics are moderate.

That data says Illinois is not a lost cause for Republicans. It’s not far-left California or New York as some are claiming. If Republicans do a better job with working class, moderate voters, they can win.

The Top Issue of the 2022 Election: Threats to Democracy (Not Abortion)

We all missed this. I’ll admit it: I missed this. Some kudos to Emerson College who included “threats to democracy” in their list of issues when most of us didn’t, though even in their poll it came in a distant 2nd to the economy.

When building out your issue focus as a party or candidate, you look for two things: emotional issues that can fire up your base, and persuasive issues that can win you votes.

For base issues, Democrats had the advantage in 2022: their emotional issue, abortion, performed much better with their voters (29%) than Republicans’ emotional issues, inflation and crime, performed with theirs (20% and 18% respectively). Abortion played especially well with Hispanics (33%) and Asians (31%).

So were Republicans wrong to focus on crime?

No, Crime Wasn’t a Loser for Republicans – The Messaging Was

In what turned out to be a stroke of genius, at the last minute we added a question to our survey asking voters if they had to choose between abortion and crime as the issue that most determined their vote in 2022, which would they choose? The result was nearly a tie: 51% for abortion, 49% for crime.

We’re not saying crime was a better issue than abortion, because the data doesn’t bear that out. But it also doesn’t align with the narrative that abortion was THE issue in 2022. For every demo that showed stronger support for abortion, like females (54%), Hispanics (67%), Asians (57%), and suburban voters (54%), there were nearly as many demographics that showed stronger support for crime, like African Americans (62%) and independents (58%). Among moderates, it was split, 51% abortion to 49% crime.

Using crime as an issue was a smart move by Republicans, because to get voters’ attention nowadays you have to actually be interesting, and let’s face it—the economy is boring to voters.

Where Republicans failed (including us) was in making crime THE issue instead of a gateway issue to voters’ real concerns. Crime was never THE issue: it was the 4th most important issue among even conservatives, let alone moderates and independents. But it could’ve served as an excellent emotional issue to gain attention to then paint Democrats as extreme, position Republicans as the more mainstream governing party, and address voters’ economic concerns. We didn’t do that.

By contrast, Illinois Democrats did it right: they used their emotional issue, abortion, to get voters’ attention and then flowed right into their most persuasive issue, painting Republicans as too extreme and a threat to democracy.

But, hey, Republicans have been bad at messaging since the 1980s and 90s. In fact, we still rely mostly on messaging from those decades. So it’s routine at this point. Maybe this time we’ll learn…

Republicans Ceded the Ground on “Extreme” and Shouldn’t Have

That’s right—even after millions of dollars were spent painting Republicans as extremists while Republicans barely (if at all) fought back, voters are still nearly as likely to believe that Democrats are just as bad.

Independents tell this story best. When asked which party they trusted more to govern, they couldn’t choose between Republicans and Democrats (tied at 29%)—instead, they chose neither (37%). They overwhelmingly believe Illinois is on the wrong track (56% compared to 30% right direction).

Instead of constantly playing defense, it’s time to go on offense. Illinois Democrats hold extreme positions on many hot-button issues, yet Republicans seem to enjoy the Rocky strategy of getting pummeled round after round—without the Hollywood happy ending. And with the Democrats’ elected ranks moving further and further leftward, and their politicians feeling emboldened by record majorities in Springfield, Chicago, and many suburban counties, Republicans are sure to have excellent opportunities to paint our opposition as extreme, which by definition, makes us mainstream. We must capitalize on these opportunities.

Republicans Need to Get Back to Being the Governing Party

While Republicans underperformed expectations across the country, among Republicans who were successful, there was a clear picture of the type of Republican who won: governing Republicans. This has nothing to do with ideology. Conservative or moderate, voters want leaders who are the adults in the room, who lead pragmatically and get things done.

Unfortunately, Republicans have been unable to capitalize on this. It doesn’t help that the last time voters gave our party the opportunity to govern, Bruce Rauner and his administration spent four years trying desperately to convince voters our party had no idea what we were doing.

By contrast, Governor Pritzker has focused on getting state government running smoothly, and it’s worked. A 47% to 47% split in the right direction vs wrong track question may not seem great until you look at the trendline and realize this is the best IL has been viewed by voters in this category (by far) over the past decade.

The Republican strategy of screaming “the sky is falling” and “all is lost” is clearly not working. The voters in this state aren’t hyper-partisans or idealogues. They just want things to get done—they’re not interested in the drama and hyperbole. I can’t remember the last time Republicans proposed any sort of productive plan, policy, or initiative that would make people’s lives better in this state, other than simply saying no to bad ideas.

Throughout the Illinois suburbs and beyond, there are conservative and Republican mayors earning high praise in their communities for leading, as clients in one village put it, by putting “people over politics.” Their communities are thriving and people are moving there to live, work, and raise their families. These are governing Republicans. That’s the model of a winning Republican candidate.

Candidates Need to Fit Their Districts

Both conservatives and moderates are going to like portions of this.

Conservatives will like this. Despite all the rhetoric to the contrary, Darren Bailey actually didn’t perform badly. His base performance nearly exactly matched Pritzker’s and he lost independents by just .67%. Despite being massively outspent and running a poor campaign, had this been a state with a balanced electorate, Bailey would’ve been within 1% of winning.

As a data guy, one thing that has always fascinated me is how misleading percentages and averages can be without context. Here’s a simple example. You ask a group of 10 people how much they liked the latest Star Wars trilogy on a scale of 1 to 5, and all of them give it a ranking of 3—that’s an average score of 3. If instead, half give it a perfect score of 5 and half the worst score of 1—that’s also an average score of 3. Each result is the same, yet those 3s couldn’t be more different.

Now take that dumb example and bring it to this context. We could look at the statewide averages and, as some are advocating, shift the entire Illinois Republican Party to the middle. But not only is this the lazy approach, it doesn’t reflect the data. There are clearly portions of this diverse state that want candidates more conservative than the average, just like there are portions of the state that want candidates more liberal than the average.

Instead of the above one-size-fits-all “or” approach, we could take a more dynamic “and” approach that welcomes all center-right viewpoints and supports candidates that best fit their districts and communities. That means conservatives in some districts and moderates in others.

It’s time we stopped letting the politics of “or” divide us. Is this possible? The data says yes.